It was only a 3 hour tour! Honest!

It really started out that way. I had scheduled Wind Angel to get pulled and have the bottom painted for Friday, May 16th. I took a day off work, 'cause the marina, Two Way Boatyard, didn't work on the weekend and I wanted to get it there while they were still around. It is a bit over 3 hours from the condo docks at St Simons Island where I keep the boat to Two Way. My best friend Phillip Kempton and his wife Patty were my crew for the day. Phillip had just passed his 50 ton masters license exam the week before and I was confident I was in good hands. 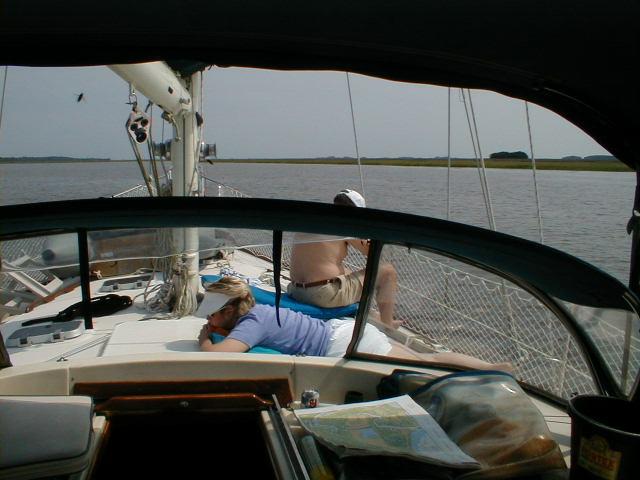 We met at Two Way about 8am and dropped his vehicle off and drove to the Condo docks. It took about 1/2 hour to get underway. It had been a while since I had moved the boat and the beard kept us at about 3 knots for a few minutes until it washed away. Finally we were steaming away at a respectable 5+ knots when I glanced down and saw the oil pressure at zero. I panicked.

If you've followed my previous trips, you'll know that's not an unusual reaction for me. I immediately shut the engine down to contemplate the situation. I decided to check the oil again. It was a bit low, but I didn't think a pint low would cause this problem, nevertheless, I topped it off. I climbed back in the cockpit and started the engine. Ah! Oil pressure again. OK, so off we go. Oops, the oil pressure just dove to zero again. Hm? I backed off the throttle and it came back to normal. I edged the throttle up a little at a time and at one point the needle began to flicker. As I moved it up further, it flickered a lot before it dove to nothing again.

That's not indicative of a faulty pump or a leak, that's a problem with the metering. I then went down to inspect the engine and when I touched the wire going to the oil sending unit, it fell off. Rotted away. Whew! I replaced the connector, went topside and exercised the throttle a bit. Oil pressure is back to normal at all throttle positions. Problem solved.

I was quite happy. Murphy had struck and I had beaten him back. I was sure that was all the excitement we would have this trip. After all, what can go wrong in just a 3 hour tour?

It was a great day to be on the water, even if the deer flies were numerous and biting. Here's my first attempt at pan photography. You can see that I have a ways to go before I become a pro.

That's Philip with his back to you. He's in the process of turning to look at me. First lesson. Don't have live people in the overlap area of a pan. Second lesson. Be sure the camera is in the same spot for each shot. Don't just turn about a point, turn about the camera position. Hence the strange effect at the bow. Looks like there are two bows on the boat.

So we had a leisurely trip up the ICW toward the marina. Here's a shot of the Georgia marsh area. 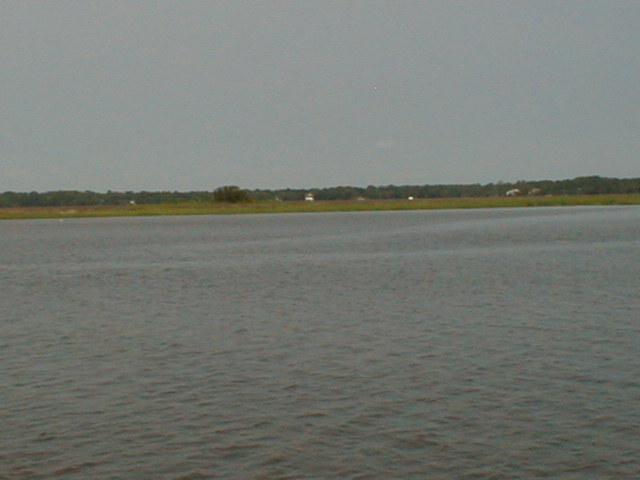 About 11:30 I slowed down to allow an overtaking boat, Night Wind, to pass. We were coming up to a narrow part of the waterway and I knew from the way he was following my erratic maneuvers that he didn't know this part of the ICW and was following my every move. I didn't want him passing me in the narrows. When I throttled back up, there was a tremendous banging that shook the boat down to it's roots. It sounded like it was coming from under the rear of the boat. I immediately thought I had fouled the prop with a line and something attached to the line. There were no crab traps in the immediate area, since I was near the middle of the channel. I throttled back and found I could make about 1+ knots good without a serious rattle. I tried to call the marina for help, but I got someone at the marina, not the boat yard and he said he'd get a message to the boat yard. Right. After not hearing anything for a while, I picked up the phone and called the boat yard and asked if he could find a diver to unfoul my prop. He said he'd try. After a while I decided to make use of the wind, after all this is a sailboat and the wind is behind us. I put out the genny and we picked up to around 3 knots. Charlie called on the vhf a bit later and said he wasn't able to connect up with a diver and advised me the current was running about 3 knots out of the river I had to turn up. Let's see. 3 knots - 3 knots =0. OK, I wasn't going to be able to go upstream. We finally made it to the mouth of the South Altamaha River and, sure enough, we stalled. I I tossed out an anchor and broke down and called TowBoatUS. They arrived about 3pm and we departed for the marina at about 5 knots.

So she's being pulled and hopefully all will be OK and I'll have a boat with a newly painted bottom soon. Unlike Gilligan, this 3 hour tour was over the same da, if not quite in 3 hours.